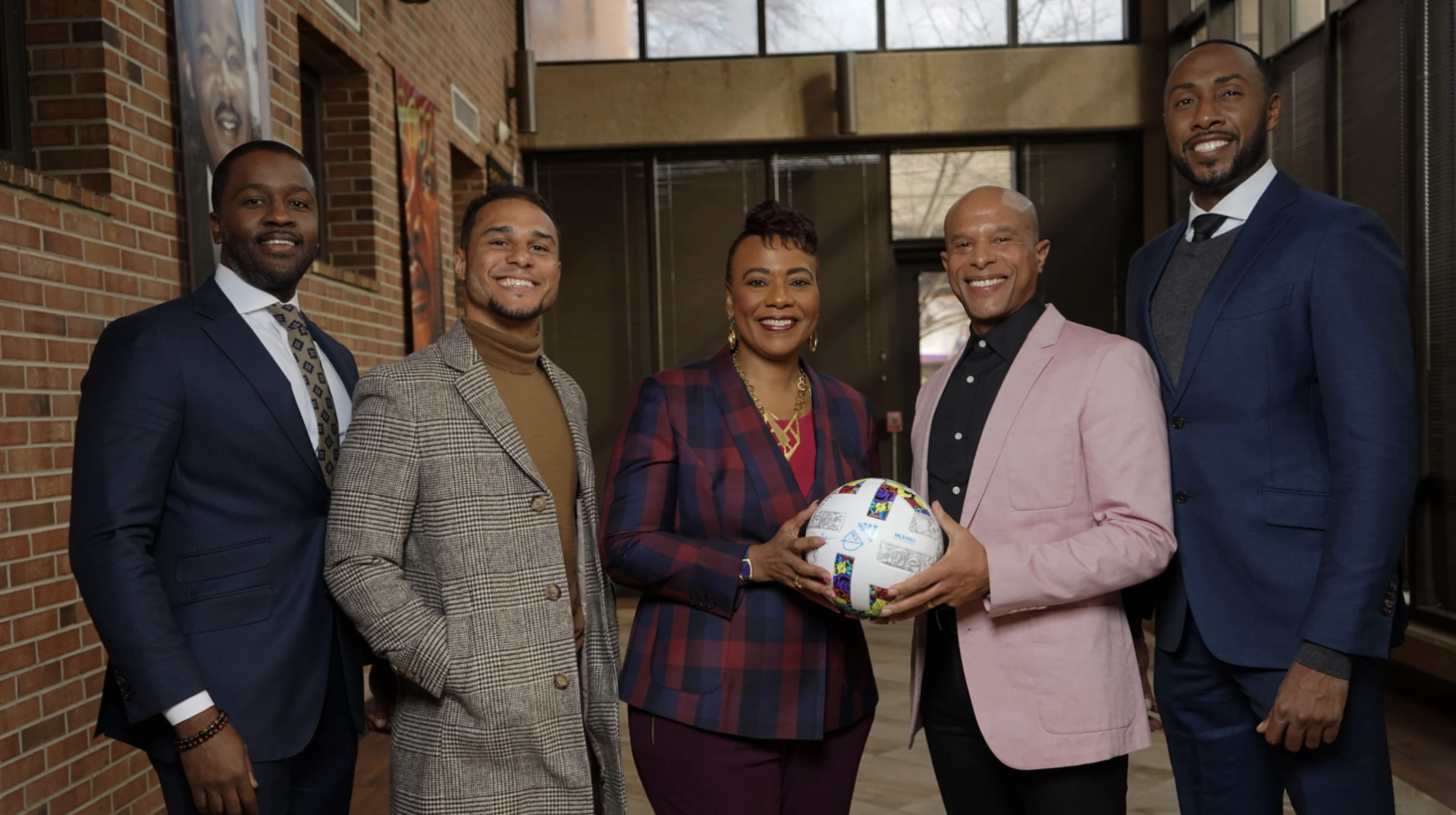 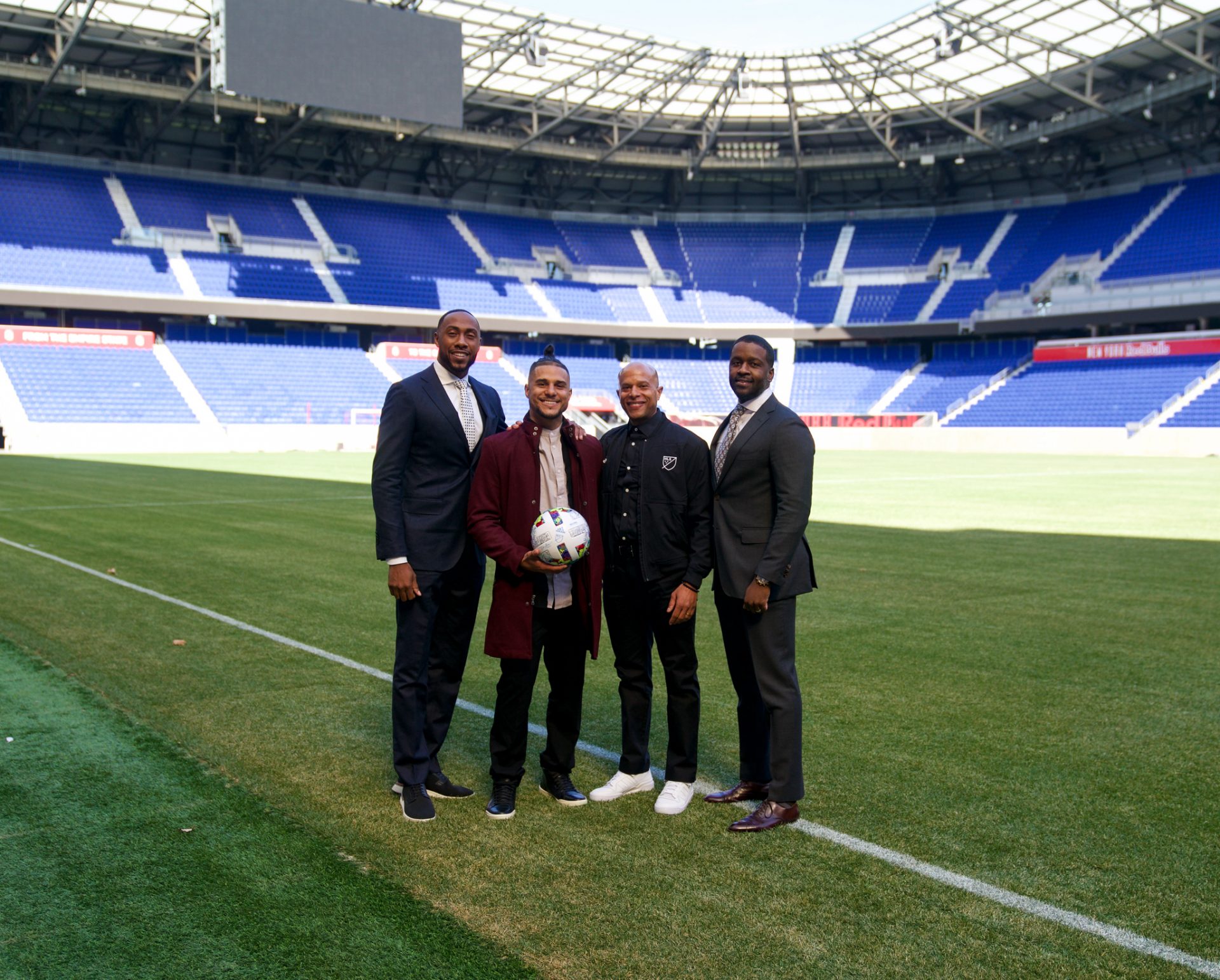 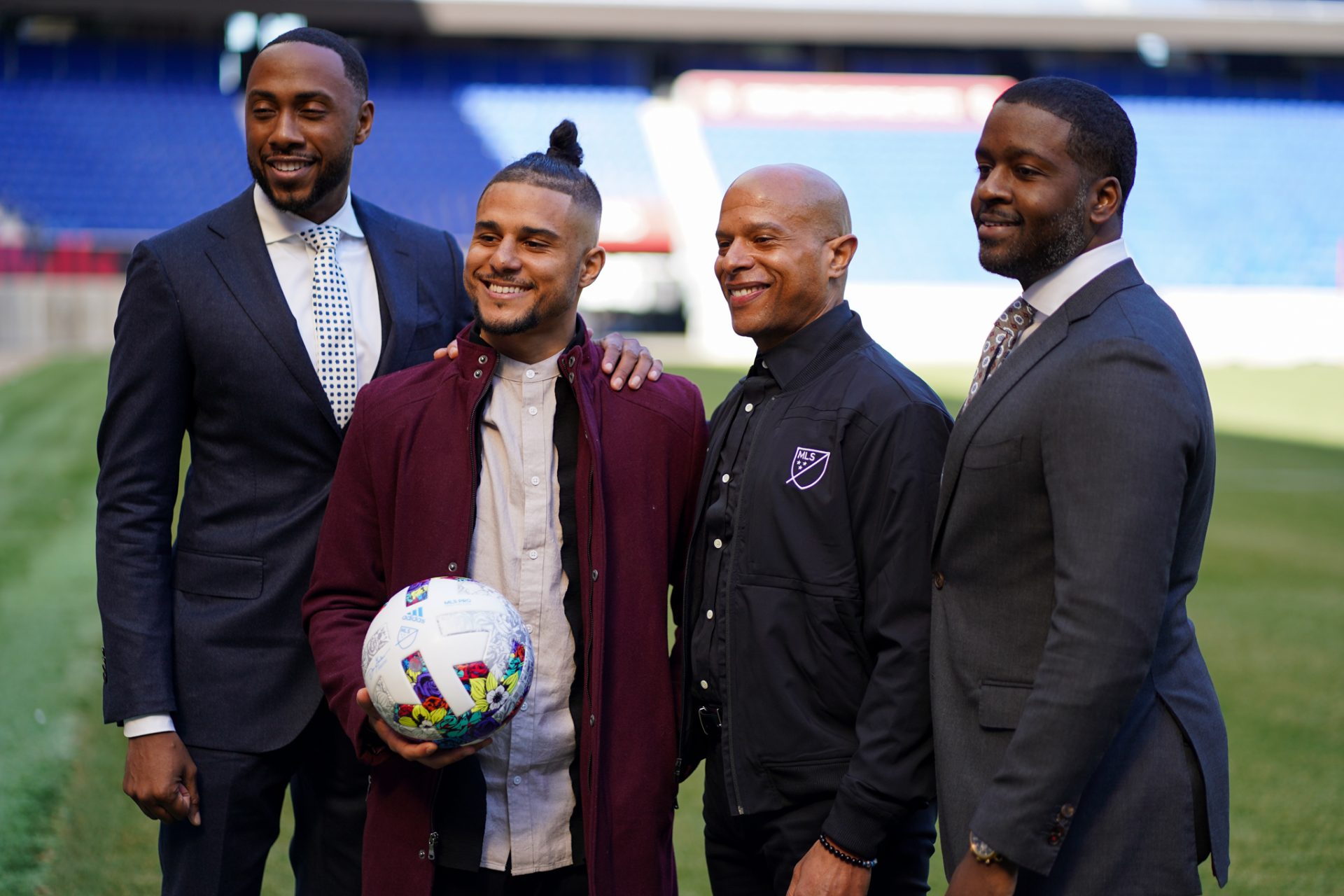 Major League Soccer today announced that it would leverage a historic $25 million loan from a syndicate of Black banks, marking the first time any sports league has participated in a major commercial transaction exclusively with Black banks. Facilitated by the nonprofit National Black Bank Foundation (NBBF), the partnership is the latest significant step in a series of ongoing efforts by MLS in the Diversity, Equity and Inclusion space.

NEW YORK (March 10, 2022) – Major League Soccer today announced that it would leverage a historic $25 million loan from a syndicate of Black banks, marking the first time any sports league has participated in a major commercial transaction exclusively with Black banks. Facilitated by the nonprofit National Black Bank Foundation (NBBF), the partnership is the latest significant step in a series of ongoing efforts by MLS in the Diversity, Equity and Inclusion space.

“Major League Soccer’s partnership with the National Black Bank Foundation is a tangible step in the efforts to close the racial economic gap in the United States, and it’s the right business decision for us,” said MLS Commissioner Don Garber. “As a league, we continue to increase our initiatives in support of racial justice. In order to make a genuine impact, economic justice must be part of the equation. This transaction with a syndicate of community-focused Black banks is an important measure, and it is our hope this will raise awareness of the importance of Black-owned banks and their impact on the economy.”

The transaction announced today, coupled with the league’s strong credit rating, will grow the banks’ capital cushion through fees and interest earned, creating additional capacity for new lines of credit for home and small business loans in communities of color across the country. In facilitating the loan, the NBBF organized a syndication team led by Atlanta-based Citizens Trust Bank and New York-based Carver Federal Savings Bank.

“Major League Soccer has raised the bar for corporate America with this transformative partnership,” NBBF co-founder and general counsel, Ashley Bell, said. “If other leagues and major corporations follow the MLS model, lives of Black families all across this country will change for the better because their local Black bank will have the capital resources to approve historic numbers of home and small business loans.”

Black banks fuel social mobility in the United States by connecting borrowers of color to capital. However, the sector’s impact has been limited by a chronic, acute undercapitalization that has restricted the flow of credit it could create for underserved borrowers.

According to the Federal Reserve, the Black-white economic gap in the United States has remained virtually untouched since the Civil Rights Movement. Historical efforts by Black families to escape the continuum of poverty by building intergenerational wealth, primarily through homeownership and small business entrepreneurship, have been thwarted by racialized credit access. In 2020, lenders denied Black mortgage applicants at a rate 84% higher than white borrowers.

Transacting major deals with Black banks as MLS has done is one step of many in erasing America’s racial wealth gap. These partnerships diversify Black banks’ portfolio risk and grow their capital capacity to create and extend credit and other wealth-building services to Black borrowers.

Roughly half of all U.S. Black households were unbanked or underbanked in 2019, compared to just 15 percent of white families. The lack of access to essential financial services has forced Black households to rely on costly alternatives like check-cashing services, payday loans, money orders, and prepaid credit cards. Over a financial lifetime, those fees can total upwards of $40,000, according to the Brookings Institute.

As part of this partnership, MLS will work with the National Black Bank Foundation, 100 Black Men of America, Inc., National Coalition of 100 Black Women and Black Players for Change to educate their constituents and members on economic empowerment programming.

MLS and the National Black Bank Foundation worked with leaders across the league including club ownership, current and former MLS players and league officials to bring this landmark partnership to fruition.

In October 2020, MLS unveiled a series of initiatives aimed at combatting racism, advocating for social justice and increasing Black representation in the sport. Using the league’s resources and platform to make tangible contributions to closing the racial wealth gap is one important component of MLS’ commitment to diversity, equity and inclusion.

WHAT KEY STAKEHOLDERS ARE SAYING

“This transformative partnership between MLS and Black banks around the country is evidence of what can happen when leaders courageously stand up and decide to participate in equitable change,” said King Center CEO and National Black Bank Foundation Board Member, Dr. Bernice A. King. “I brought MLS and NBBF together because I saw an opportunity to create a partnership with the power to transform lives in Black communities and change hearts and minds throughout our nation. This deal undoubtedly marks an important moment in the continuing struggle for civil rights in the United States.”

“Throughout America’s history, sports have been the backdrop for major turning points in our ongoing battle for racial and economic justice, and MLS’ new partnership with Black banks is a landmark moment in that legacy,” said New York City FC Vice Charmain and Jackie Robinson Foundation co-founder Martin Edelman. “Sports have the platform to bring diverse coalitions together and to capture the nation’s attention; what MLS is doing today is nothing short of historic and will have far-reaching impacts on Black families, Black businesses and Black communities looking to build wealth.”

“Black Players for Change was founded on an ethos of Radical Transparency and principle of advancing cultural change for the betterment of communities of color. I am honored that our activity and involvement with MLS has assisted in this landmark relationship with NBBF,” said Black Players For Change Founder and 11 Year MLS Veteran Quincy Amarikwa. “Through securing deals like the one we celebrate here today, we directly address and establish a platform to overcome the undervaluing of Black participation in the economic ecosystem. Creating opportunities like this demonstrates that we are moving in the right direction. We welcome the opportunity to continue this positive forward momentum in partnership with MLS and others.”

“I would like to thank all of the individuals who made this historic transaction a reality. It is an example of what’s possible when inclusion, intentionality and innovation intersect,” said MLS Executive Vice President and Chief Diversity, Equity and Inclusion Officer Sola Winley. “For Black entrepreneurs, aspiring homeowners and communities of color, access to capital got a bit easier today. MLS’s commitment to social justice is guided by the awareness that systemic change requires sustained energy and the impact or limitation of any change effort is often in the hands and hearts of individual leaders and decision-makers.”

“This partnership is a testament of how we are stronger together,” said Cynthia N. Day, President and CEO of Citizens Trust Bank. “MLS and the NBBF are aligned with and trust our commitment to make a difference in reducing the racial wealth gap with diversity and inclusion woven into every aspect of our economic ecosystem. Our goal is to provide access to capital for more minority businesses that represent the lifeblood of our communities. They are the catalyst for creating jobs, supporting homeownership, and creating sustainable wealth for generations. We look forward to the many opportunities for partnerships like these that promote and assist in our continued pursuit of the health and financial well-being of minority businesses, families, and communities,” added Day.

“Carver Federal Savings Bank is thrilled to partner with Major League Soccer to meet its loan capital needs,” said Michael T. Pugh, President and Chief Executive Officer of Carver Federal Savings Bank. “This opportunity highlights the breadth and scope of our team’s commitment to providing tailored financial solutions to our customers. As a leading Black-managed, Minority Depository Institution (MDI), we remain committed to economic equality for all and would like to thank MLS for their collaboration.”

“This transaction demonstrates the ability of Black banks to execute at the highest levels”, said NBBF Co-Founder and Chief Banking Officer, Brandon Comer. “The millions of dollars the banks will receive from this investment grade borrower helps to diversify their lending portfolios, thereby ensuring their ongoing sustainability and capacity to serve our communities.”

“The mission of 100 Black Men of America, Inc. is to is to improve the quality of life within our communities and enhance educational and economic opportunities for all African Americans,” said Thomas W. Dortch Jr., Chairman, 100 Black Men of America, Inc. “We look forward to partnering with MLS and others to provide resources and programming that will positively impact our mentees and the communities we serve.”

Headquartered in New York City, Major League Soccer – celebrating its 27thseason in 2022 – features 29 clubs throughout the United States and Canada, including 2022 expansion team Charlotte FC and St. Louis City SC, which debuts in 2023. For more information about MLS, visit www.MLSsoccer.com.

About the National Black Bank Foundation

The nonprofit National Black Bank Foundation and its investment unit, the Black Bank Fund, were formed in 2020 to uplift Black-owned banks and the communities they serve. Working with corporate and philanthropic partners, the Foundation provides legal, regulatory, and operational assistance to Black banks while the Fund will provide direct Tier 1 capital investment into existing Black banks through stock purchases. For more, visit NBBFoundation.org.

About Black Players For Change

Black Players for Change (BPC) is an independent 501(c)(3) nonprofit organization consisting of over 170+ Black players, coaches and staff from MLS, working to bridge the racial equality gap that exists in society. BPC is committed to tackling the racial injustices that have limited Black people from having an equitable stake in the game of soccer and society. Among the many goals, the organization strives to advance the attention on human rights inequalities from protest to programs, partnerships, and policies that address systemic discrimination. For more information visit www.BlackPlayersForChange.org

About The National Coalition of 100 Black Women

The National Coalition of 100 Black Women, Inc., (NCBW) is a 40-year-old advocacy organization whose mission is to empower Black Women and Girls through greater access to education, political strength, business opportunities, financial literacy, and civic responsibility. Each of our members embraces the value of nurturing young Black women as they look forward to a brighter future. Currently, with 62 Chapters across the country, we stand tall and ready, while making a difference in the lives of Black Women and Girls. NCBW provides leadership and guidance to assist  Black women to excel in their chosen field and/or to achieve a better standard of living.

One Hundred Black Men was founded as an organization in New York City in 1963. The national organization, 100 Black Men of America, Inc. began with nine chapters in 1986 as a national alliance of leading African American men of business, public affairs and government with a mission to improve the quality of life for African Americans, particularly African American youth. These visionaries included businessmen and industry leaders such as David Dinkins, Robert Mangum, Dr. William H. Hayling, Nathaniel Goldston III, Livingston Wingate Andrew Hatcher, and Jackie Robinson. Since inception, the vision emerged and grew to over 10,000 members impacting over 125,000 underserved, underrepresented minority youth annually. Visit www.100blackmen.org for more information on the programs and initiatives of 100 Black Men of America, Inc. and their global network of chapters.